Narratives of Political Unity in Times of Differentiation 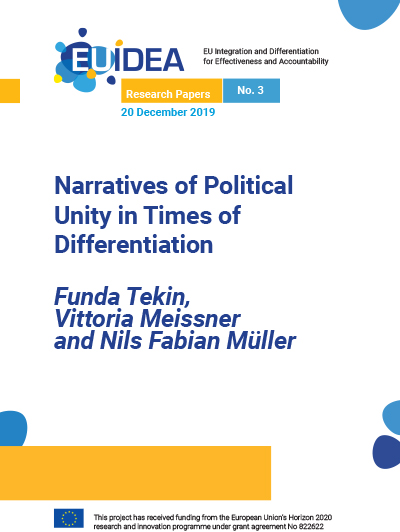 Heterogeneity among countries in the European Union has continuously grown through enlargement processes or the outbreak of specific crises. After reaching important outcomes such as the European Monetary Union or the Schengen Agreement, in the face of the “big bang” enlargement of 2004 both national and European Union representatives subsequently committed to the motto “united in diversity”, confident that the European project would progress and deepen. Nevertheless, the crises in the euro area posed a number of new internal and external challenges to the overall European integration process as well as the EU’s political unity in terms of member states sharing the same rights and obligations, making permanent forms of differentiated integration more likely. Against this background, the paper presents a new collected dataset to outline how the EU narrative of political unity changes during times of increasing political differentiation and consequent differentiated integration. As such, it conducts a narrative analysis in two selected cases, the period between 2000 and 2004 preceding the big bang enlargement as well as the years of the crises in the euro area between 2010 and 2014. Although the existing narrative of political unity in the EU has changed in response to the crises under the more sceptical phrase “divided in unity”, our analysis shows that differentiation is not a threat to political unity.