Uniformity and Differentiation in the Fundamentals of EU Membership: The EU Rule of Law Acquis in the Pre-and Post-accession Contexts 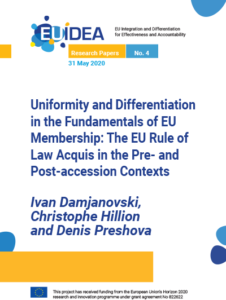 31 May 2020
Uniformity and Differentiation in the Fundamentals of EU Membership: The EU Rule of Law Acquis in the Pre- and Post-accession Contexts
Ivan Damjanovski, Christophe Hillion and Denis Preshova

The paper discusses the nexus between the EU pre-accession conditionality and membership obligations to guarantee respect for the rule of law as a founding value of the EU, common to the Member States. It does so through the prism of the notions of legal uniformity and differentiation. The paper examines how the EU’s rule of law promotion in the accession process converges with and potentially inspires the progressive EU articulation of standards applicable to the Member States. By focusing on the judicial dimension of the rule of law, it is argued that while a certain diversity is conceivable in the manner in which the rule of law is observed, and more specifically in how judicial independence is achieved at the national level, there is a functional rationale for the EU to circumscribe the heterogeneity of national judicial systems – and accordingly, for elaborating common rule of law standards in the EU.