A Differentiated “Dual Track” European Union as a Remedy in Times of Crisis? Debating Habermas, Arendt, and the Theoretical Foundations of Graduated European Integration 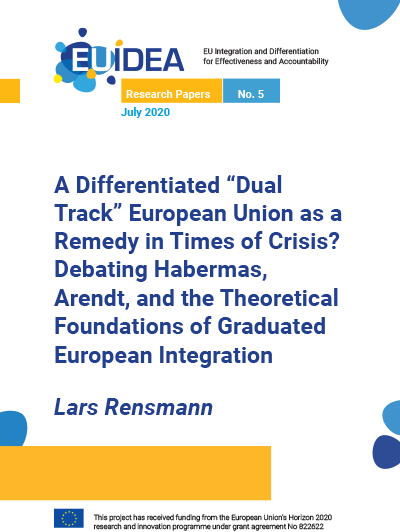 This EU IDEA paper engages with ideational origins and normative political theories of European differentiated integration. Specifically, it examines a “graduated” policy of integration backed by European-wide referenda in light of the work of Jürgen Habermas and Hannah Arendt – two theorists who are strong advocates of European political integration and constitutionalisation. The paper illuminates justifications, advantages, dilemmas and problems of such differentiated integration with regard to its democratic legitimacy and normative as well as political-theoretical plausibility. While Habermas has proposed and refined this model, Arendt’s radically pro-European ideas can work as a cautioning corrective alerting to the risks and potentially disintegrating effects of differentiated solidarity and integration on the European project. While she would arguably see the democratic legitimation benefits of a European-wide constitutional referendum as suggested by Habermas, her work also points to the risks of further fragmenting or even dismantling the EU altogether.