Differentiated Cooperation in European Foreign Policy: The Challenge of Coherence 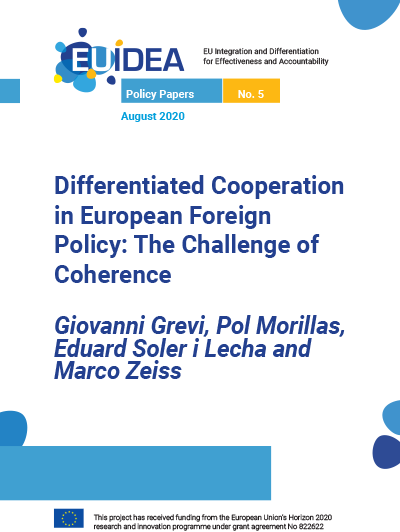 This paper addresses the central question of the interplay between mostly informal differentiated cooperation formats in European foreign policy, and the foreign policy of the EU. It provides an overview of the Treaty-based mechanisms enabling differentiation in EU foreign policy and assesses why these arrangements have hardly been used. It then outlines the ways in which EU member states operate through flexible mechanisms and applies this analytical approach to two case studies covering important dimensions of European foreign policy – the Western Balkans and the Middle East Peace Process. The paper notes that the coherence between the initiatives of various groups of member states for on the one side, and EU decisions and goals on the other, is critical to advance the EU foreign policy agenda. It finds that the willingness of EU member states to let some of them play a leading role to attain broadly shared goals, the presence of established EU positions and instruments, the role of third powers and the involvement of EU institutions in arrangements for differentiated cooperation, are key factors for differentiation to effectively foster EU foreign policy.