Brexit and External Differentiation in Foreign, Security and Defence Policy 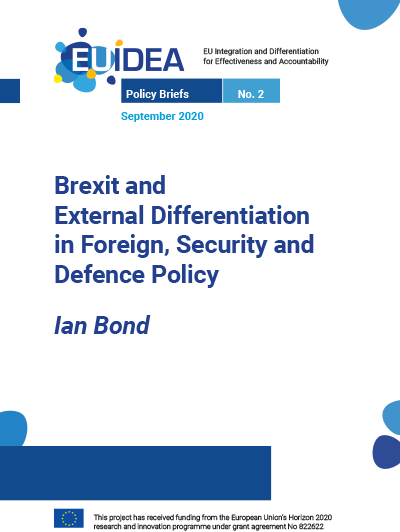 This policy brief examines the EU’s foreign, security and defence policy relations with third countries, and their relevance to the EU’s future co-operation with the UK in these areas. It highlights the key points in the EU’s proposals for the future relationship with the UK. The British government is currently refusing to negotiate any arrangements in these areas, and the policy brief looks at why. Since the UK’s refusal to engage may turn out to be only temporary, the paper also looks at possible arrangements falling short of a legally-binding agreement, from the perspective of negotiability with the UK as well as their contribution to meeting EU objectives. It then considers the impact on the EU and the UK of having a treaty (however unlikely), no formal agreement, or a “light” agreement, and the implications of the EU’s future relationship with the UK for its relationships with other third countries.

Introduction
1. The (very) variable geometry of third country co-operation with the EU in external security policy
2. The EU and UK negotiating positions: The sound of one hand clapping
3. Scenarios for the future EU–UK foreign, security and defence relationship
4. The three scenarios: Effectiveness of EU and UK policy
5. The three scenarios: Impact on EU unity
Outlook and conclusion
References