Differentiation from Below: Sub-national Authority Networks as a Form of Differentiated Cooperation 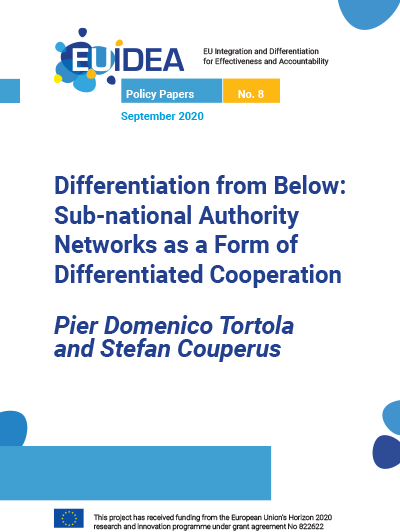 September 2020
Differentiation from Below: Sub-national Authority Networks as a Form of Differentiated Cooperation
Pier Domenico Tortola and Stefan Couperus

Transnational networks of local authorities are an established and growing phenomenon in Europe, where they perform a number of (soft) governance functions for their membership, often in direct connection with EU institions. This paper examines networks from the angle of institutional differentiation – an inherent trait of these organisations – in order to expand the analysis of this concept beyond its state-centric confines. The paper also adds to the study of (differentiated) integration more traditionally defined, both by analogy and insofar as networks are part and parcel of the Union’s system of multi-level governance. Building on original empirical data, we identify three dimensions of differentiation generated by networks – insider-outsider, compound and multi-level differentiation – and discuss their implications for the efficiency, effectiveness and legitimacy of networks’ actions. Based on our analysis, we formulate three broad recommendations for policy-makers involved in networks: first, strive for inclusion, especially of smaller and less administratively capable sub-national governments; second, improve available information on networks in order to make their landscape more efficient; third, exploit the paradiplomatic advantages of networks both outside and inside the European Union.