Virtual workshops and Executive Board meeting in Istanbul 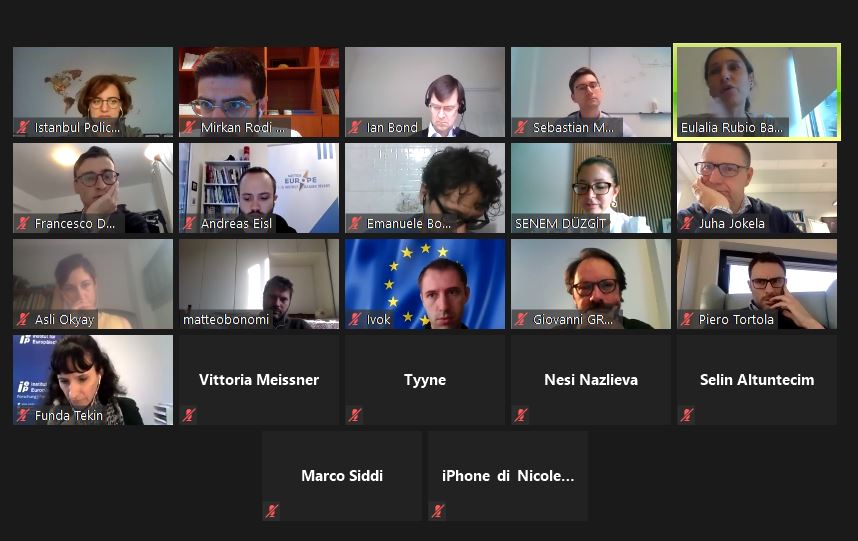 Time to take stock of the on-going analysis and to draw some preliminary conclusions from the case studies, for the big EU IDEA family. Led by Istituto Affari Internazionali (IAI) and financed by the European Commission under the Horizon2020 program, EU IDEA – Integration and Differentiation for Effectiveness and Accountability – addresses differentiation and integration issues in order to find viable solutions to the current challenges that the EU is facing. And EU IDEA came back to fulfill its mission with a new “plenary sitting” since the last one held in April 2020.

The COVID-19 pandemic showed how important the single market is. Since the beginning of the outbreak, the European Commission has been working with the aim of preserving the single market in its full capacity and functioning. The consortium members held a video-conference workshop at the beginning of October (9 October) to have an exchange of views on the latest key findings for the economic integration of the EU. The special workshop replaced the working meeting originally scheduled for the same day in Istanbul, which was not possible to be held in the regular format due to Coronavirus related restrictions.

Nevertheless the EU IDEA consortium decided not to waste time and to engage in an in-depth debate on a series of topical matters. Not just the single market was on the EU IDEA’s agenda.

Three out of twelve work packages have been the object of the extraordinary workshop. It focused on “Economic and the Monetary Union and the Single Market” (WP 4, coordinator: Jacques Delors Institute – JDI, France), “Foreign Security and Defence Policy” (WP 5, coordinator: Finnish Institute of International Affairs – FIIA, Finland) and “Area of Freedom, Security and Justice (AFSJ), including migration” (WP 6, coordinator: Centre for International Information and Documentation in Barcelona – CIDOB, Spain).

Foreign, security and Defence pPolicy is traditionally an area where the EU member states encounter more difficulties than other policy areas to get a common approach. Apart from that, the Brexit negotiations still without a clear outcome pose new question marks for the near future of the European integration process.

Finally, on migration. At the end of September (23 September) the European Commission put on the table a new proposal for a common asylum and migration policy, and the political debate has been revitalized. EU IDEA’s members keep working on this pivot subject and the prospects of differentiated integration in this field.

Single market, foreign and defense policy, migration: what all these topics have in common? The investigation conducted by EU IDEA researchers aimed to analyse how differentiated integration works in practice. Does differentiation work? Is it an opportunity not to miss for the EU? Can it be the key for the evolution of the European project? What are its main challenges and risks? All these questions are about to be answered by EU IDEA.

So, stay tuned on EU IDEA.