Differentiation and the European Union’s Foreign and Security Policy 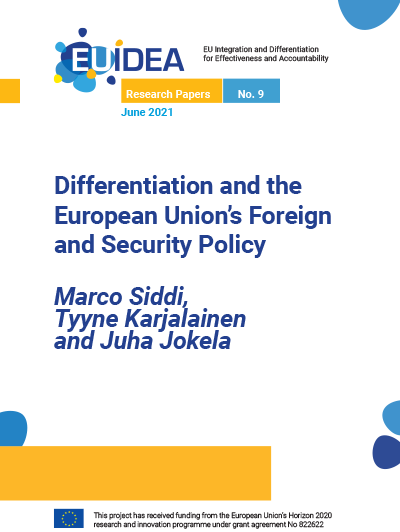 Differentiation is a frequent modus operandi in European foreign, security and defence policy. EU treaties have introduced legal frameworks for various types of formal differentiated integration in this policy area. However, they have rarely been used in the field of foreign policy and were only recently launched in the field of defence policy. On the other hand, empirical analyses show that EU member states have engaged in a range of informal practices of differentiation, such as regional groupings, contact and lead groups, and various defence initiatives. This article reviews the scholarly literature and recent empirical analyses of differentiation in EU foreign, security and defence policy. In doing so, it assesses their legitimacy and accountability, and calls for a more explicit focus on effectiveness. Drawing on case studies of differentiated cooperation with non-member states, the article argues that effectiveness depends on shared interests rather than on the level of institutionalisation of the partnership. In a second step, the paper focuses on EU foreign policy in the Western Balkans, the Middle East and the Eastern neighbourhood. It contends that differentiated cooperation has had largely positive outcomes when it has adhered to common EU values and positions. Conversely, when this has not been the case, differentiation has undermined EU foreign and security policy.