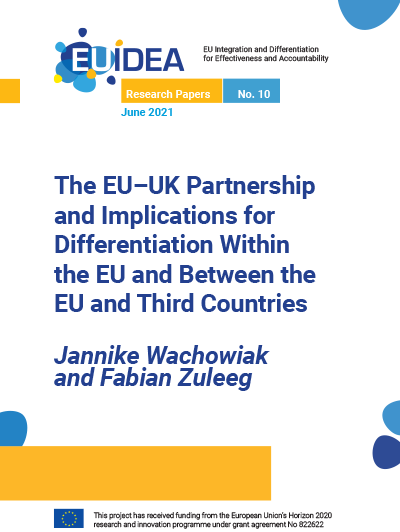 The UK’s departure from the EU represents a unique process of disintegration that fundamentally changes EU–UK relations. This paper discusses the nature of the Trade and Cooperation Agreement (TCA) as the new basis of EU–UK relations, as well as its sustainability, legitimacy and effectiveness. It finds a thin and unfinished relationship with inbuilt possibility for better or for worse, but with politics pointing to growing estrangement and divergence over time. The loss of trust over the last five years has been bleeding into all levels of the relationship, raising the question whether the technocratic governance structure can work in the high-friction context of EU–UK relations. Given the UK’s economic and political weight in Europe, the paper looks at the implications for differentiation within the EU and between the EU and third countries. It illustrates how the introduction of a new mode of external differentiation in Europe – a former member state with no intention of membership in the future – impacts existing modes of differentiation. It finds that the reality of Brexit suggests a more hard-line approach towards third countries, sending the message to members and non-members alike that membership matters. Flexibilities are thus a benefit for EU member states that have signed up to the EU’s core principles in full. The paper concludes that the EU needs to stay attentive to evolving perceptions of Brexit, and show that EU membership remains attractive, also for candidate countries, and is a relevant framework for dealing with global challenges that cannot effectively be addressed at the national level.