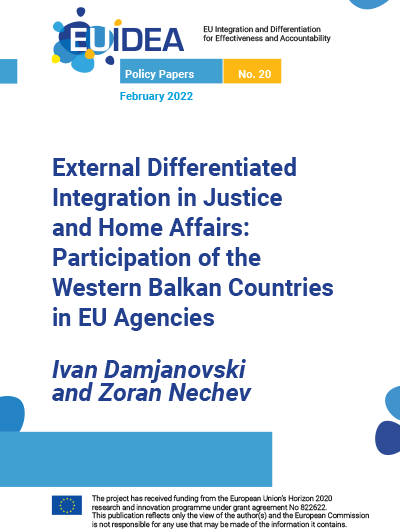 Justice and Home Affairs (JHA) policies, and especially migration and border management, have been on the forefront of deepening relations between the European Union and the countries of the Western Balkans. The recent events caused by the migration and asylum governance crisis in 2015/16 have clearly shown that EU problem-solving outputs in migration management have become increasingly reliant on cooperation with the Western Balkan countries. The resulting gradual inclusion of the relevant law enforcement authorities from the Western Balkans into the operational activities of the JHA agencies has directed them towards a governance-type, day-to-day interaction that has enabled them to take part in implementation of EU policies that could go beyond borders and jurisdictions. This policy paper aims towards a preliminary mapping of the modalities of participation of the Western Balkan countries in EU JHA agencies in the context of differentiation. With a particular emphasis on cross-border cooperation in migration management, asylum and fight against organised crime, the paper focuses on analysis of participation of the Western Balkan countries in three key JHA agencies: the European Agency for Law Enforcement Cooperation (Europol), the European Border and Coast Guard Agency (Frontex) and the European Asylum Support Office (EASO).