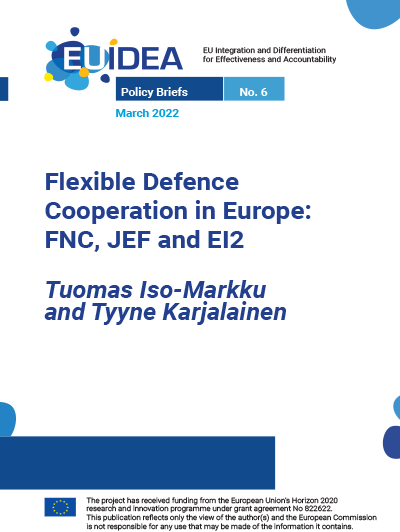 Defence cooperation between European Union member states has long been characterised by a high level of fragmentation. To manage, and potentially overcome, some of the existing divides, differentiation has been recognised as one way forward, exemplified by the activation of Permanent Structured Cooperation (PESCO) and discussions about the use of Article 44 of the Treaty on European Union. However, beyond treaty-based forms of differentiation, EU member states have also joined extra-EU frameworks for defence cooperation such as the Joint Expeditionary Force, the Framework Nations Concept and the European Intervention Initiative, which embody different levels of formalisation, diverse memberships and foci, as well as varying links to the EU and NATO. This Policy Brief analyses whether this kind of differentiated cooperation outside the EU structures contributes to the long-term prospects of European integration in security and defence, or whether it adds to the existing fragmentation within the EU and European defence more broadly. The paper argues that the flexible defence frameworks bear some potential for enhancing defence cooperation among EU member states, but also present challenges. Moreover, their ability to manage diversity in European defence remains largely unproven.

Introduction
1. Heterogeneous frameworks: FNC, JEF and EI2
2. Agenda: To complement, not duplicate?
3. Membership: Balancing between inclusivity and effectiveness
4. Relations to the EU and NATO: Outside, yet coordinated?